SPARKY'S DEBUT
Well, it looks like we are serious about the training already (!). Second time out this week, today with two teams of 6. And it´s Sparky´s DAY today. 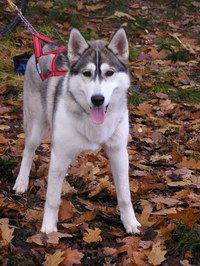 I had to change the up to detail planned out trail, suitable for braking a 7month old puppy in team, because the loggers were hauling wood there all day. Instead, we had to start on a side of a road that winds through the forrest, going up the hill, then taking a left turn to the forrest trail with a very sharp right hand loop and back down hill.
First I took the „wild guys“, who turned out to be not as wild afterwords and we had a very pleasant run together. Brandy sure didn´t lose any of her great leader abilities even when two big does jumped across the trail right infront of the team. She did want to follow them of course (as did the rest of the team), but upon my command she kept going on, only with her head turned after them. Most of the dogs in this team (Baiak, Blacky, Lorvin and Brandy) were actually members of my dad´s racing team. But since he is very bussy the late years and decided to run recreationally, I am running with all our dogs, with the help of Jachym now. Even they are used to a different voice and style and some of them are dady´s boys (Lorvin, Baiak), we made a big progress since last season (when I started working with them) together, and I am sure they´ll do real good this year too.
I spared the „calm guys“ for the second run with Sparky. He ran in point, beside his daddy Buck and did great. He didn´t pull the first few hundred of meters but then he picked up and figured out what´s the job. When we took the left turn and started climbing up the hill, he pulled like an experienced sled dog. We made two stops on the way, praising all the dogs for their patience with the rookie and to tell Sparky what a gooooood boy he was. He was really calm and didn´t tangle once and wagged his tail any time I spoke to him. I let Jachym drive the rig on the way back and took a close look on the dogs from the seat. I admired them all – Two of them will be 12 in the spring, Brandy ran second time in lead today and doesn´t show signs of tireness despite her 10,5, so as her brother Bering. Buck was so patient and tolerant with the novice beside him and Sparky picked up the „sled dog stuff“ so automatically like everything else we ever teach him. He even waited calmly for the watering and rode in the dog trailer like a pro. Eventhough he´ll have to wait a bit before he can start working in the team and this time it was just for fun, he already showed a big heart and interest in „the job“.
„Sparky, I whispered in his ear when we arrived home, now you are a sled dog“.