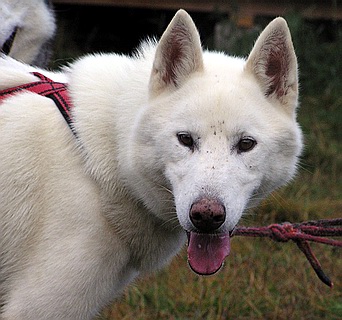 Frostie came to live with us from Kim Dulk and Bergsvein Wongraven of Husky Holiday in the beginning of August 2006.

At Husky Holiday, Frostie drove tourists and this kind of lifestyle, when he experienced constant change of drivers behind the sled and sometimes just too many people, showed as not suitable for this sensitive boy.

Frostie immediattley settled at his new home and life with our pack of dogs and found his soulmate Ziggi within minutes. They share kennel together and it is amazing to watch this couple, as they simply are "one" :) They even lay on top of the roof of their dog house in the same position, same front foot crossed over the other, usually having the same expression in their faces. What adds to the whole sweet image is the fact that they are both white, brown-eyed with liver noses and even they come from two totally unrelated bloodlines, they are of the exact same type! People simply think they are siblings.

Frostie is sensitive, totally loving boy who always shines a big smile at us. He nearly "melts" with happiness, when we praize him after a job well done in the team. He is absolutly conflict free and friendly with other dogs and humans.

He is a wonderful and very much needed assest to our team as he is a strong and determined dog, whom we mostly use in wheel. In the team, where he´s quiet, endurant and hard working, he has another buddy - Sparky, with whom they perfectly match as a working pair.

Does he have any "darker sides?" Of course, nobody´s perfect! Frostie has to pee on everything and he is SO vocal! He can yeap and whine and talk for hours, especially when we´re working outside and he wants to join us or when every morning he sees through our bedroom window that we´re awaken and soon we´ll be comming to the dog yard! And he loves checking the girls, if they are in heat, which earned him his new nickname "the Cassanova" :)

Thank you Bergsvein and Kim for trusting us with Frostie! He sure is one of our favourites we hardly imagine wouldn´t be a part of our lifes.

• Thousands of miles of driving turists in the Swedish wilderness 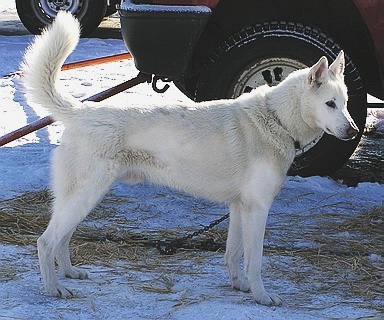 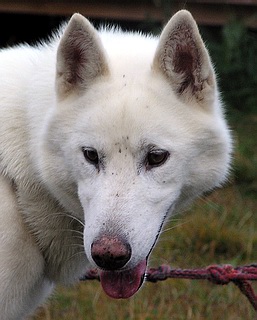