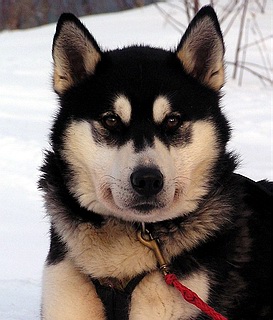 Music is proudly sponsored by Svatava & Petr Hudec from Czech Republic.
Thank you for your support of Music!


Music is despite his young age (reached 2 years in November) a strong and one of the most depedable members of our 2007/8 mainstring team. He is totally driven in harness, focussed and honest worker.

He has a friendly, outgoing personality and a sense of humor. He is a thinker too. We can often see Music "philosophing" by his dog house, and his apereance is of an intelectual introvert. But once we come over for visit, he turns into bouncy, afectionate boy again.

In the beginning of the season Music was extremly stressed and hysterical each time before start of training, but with more miles we are getting this steadily under control and he is learning to change his restless aproach for a more wise choice of taking a nap during camping and to lay down when resting. We believe that with age and experience, this will sort out.

We have tried Music on couple ocassions to lead the team back home and were quite impressed by his performance! He will start leader training after the season.

Music is a big, leggy but compactly built and handsome boy.

About Music as a puppy: Music is often reffered to as "my boy", "my sweet boy" by both, Jachym and I. We often argue which one of us was the smart one to pick Music from the litter, as we both adore him totally. He is developing great, has a wonderful, outgoing personlity, is easy to handle and is quite obedient for a dog "teenager". He´s also got a beautiful movement and loves to show-off (stacks by himself). Watch for big things in the future from this handsome boy!


BLOODLINE: Fun Run - based on Snowtrails and Igloo Pak lineage

Snowtrails CHEYENNE - Maria Lindkvist´s best all time race leader and the most remarkable dog of the kennel with great personality, intelligence and work attitude. She figurates in most Fun Run dogs´ pedigrees.

Zero´s DARGO – producer of many acceptional racing siberian huskies with „desperate working attitudes“, which many of were in teams, beating alaskan husky teams in scandinavian sprint racing scene in the 80´s

Yeso Pac´s EL DIABLO – another remarkable dog with excellent working attitude, great race results (on Karsten Gronas´s team) and great offspring. Son to the famous Yeso Pac´s SATAN. Both dogs played an important role in the breeding programs in many acceptional kennels, such as Alka-Shan, Vargevass, Alaskan Anadyr, Yeso Pac and are present in pedigrees of top racing dogs until today 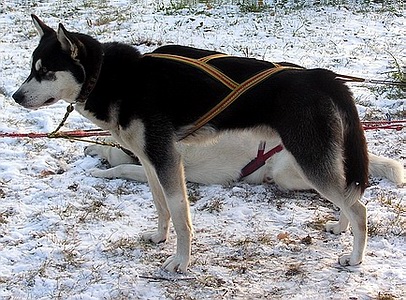 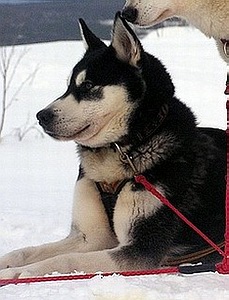